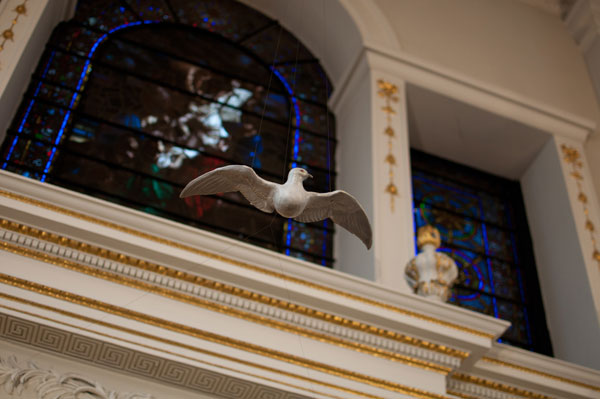 The three reredos panels, made in a method of batik using dye and wax resist were designed by Thetis Blacker in 1982. Using as her inspiration St John’s account of the Holy City seen through the Gate of Heaven (Revelation 21) she has placed the Tree of Life in the centre panel. From the roots of the tree flows the river of Life. The foundations of the city are coloured according to their stones. In the side panels are angels guarding the gate, holding Alpha and Omega, symbolising the beginning and the end of creation. The stoneware ceramic pyx holding the Blessed Sacrament was designed and made in the shape of a dove by Juliet Pilkington.

For many years the crypt at St Botolph’s was synonymous with the work for the homeless in the east end. Through the work of the Rector at the time, Malcolm Johnson, and the Community Theologian, Ken Leech, St Botolph’s cared for hundreds of people each day, providing food, medical care and advice. Churches and businesses across the country supported the work. Sadly this work closed in 2004 and we are now looking at ways we can use the crypt for community use.

In 1976 the Lesbian and Gay Christian Movement was founded at St Botolph’s and through the 1980s and 1990s St Botolph’s was a safe space for those who had been excluded from other churches because of their sexuality. Fortunately in the last decade other churches have become much more welcoming to LGBT people. The church continues to be a place where LGBT are welcomed as an integral part of our community.

In July 2005 the church was a place of rest and refreshment for Emergency Service Personnel following the bomb at Aldgate tube in which seven people lost their lives.